Please check out the Firmware Installation page to ensure you haven’t missed something associated with updating the software.

I get an ERR message when attempting to upgrade the firmware

If you are getting an ERR message when attempting to update the firmware, it is most likely because the SD card is not actually formatted for FAT32.

When this happens, one of the two necessary code files can be properly read by the system, but the other cannot, resulting in a partial attempt that fails with the ERR message.

Nonetheless, you can successfully revert back to the same version that was in there before you started the process.

Another potential cause of the ERR message is the way that you power up the unit:

Finally, in an extremely rare case or two, we have seen a properly formatted SD card fail to work for unknown reasons. Toshiba and ScanDisk 2GB cards don’t work. The solution is to use another SD card.

Please check out the User Guide to ensure you haven’t missed something associated with the operation of ToneDexter.

Does it matter where I train ToneDexter, my playing room has a very live sound?

You can train in your living room, in your kitchen, and yes even in your car. (Never train and drive and the same time!) The point is that you don’t need a refined acoustic space because the WaveMap picks up very little of the room sound.

What difference does the mic make in creating WaveMaps?

ToneDexter WaveMaps are built by comparing the mic sound with your pickup, so the resulting WaveMap will depend on both the mic’s response and most importantly on the mic position as you train ToneDexter. This is info about mics taken from the User Guide:

A small diaphragm condenser mic is recommended. Large diaphragm mics can also work well, but may be more finicky about placement. Dynamic mics, such as common vocal mics, can yield usable results, though generally will not have as much high frequency information. Tube (valve) mics, due to their higher non-linearity, are not recommended but may yield good results nonetheless. Both cardioid and omnidirectional pickup patterns will give excellent results. Active ribbon mics may also be used. Passive ribbon mics may be used so long as they can tolerate 48V phantom power. If using a passive ribbon mics, consider plugging in the mic with the unit unpowered, then applying power after that.

Can you recommend some mics for training?

The WaveMap sounds lower in volume compared to bypass

This is usually caused by the level setting algorithm not working as intended during the first part of training where LV is displayed. It is best to play a repetitive chord or notes that do not contain the low resonances of your instrument during this phase.

For guitar repeatedly strumming the upper 4 strings at the 5th fret, middle range double stops for violin, or arco open A or D string for upright bass.

Can I use the same firmware version for guitar and higher pitched instruments like mandolin or violin?

Yes! The high version firmware (called HGH, see the firmware download page) is made for just this purpose.

The created WaveMaps are exactly the same whether they reside in the upper or lower bank, it is only the live playback EQ control ranges that change. Any WaveMaps can be freely copied or pasted between banks.

The WaveMap sounds thin or hollow

This can be caused by several factors. The most common cause is mic position. Experiment with different mic positions early and often to hone in on what works. Audition with good quality, flat response headphones such as the ATH-M50. Then, after a few WaveMaps are created, test them out through your intended PA or acoustic amplifier.  The best mic position for live sound is usually not the same as what you would want to hear on a studio recording.

Another cause can be the mic choice. If you have access to multiple mics, try them all. Flat, small diaphragm condensers (pencil mics) consistently give the best results. The flatter the response, the better. Microphones with high levels of self-noise are totally usable, as the noise does not affect the quality of the resulting WaveMap.

If you have an active system, make sure your battery is not depleted. Also, make sure your volume control is set about midway. Some systems run out of headroom when set to maximum volume, and that can interfere with training.

Make sure your pickup is not on the “pickups that don’t work” list – see the FAQs on this page about pickups.

If your training session takes much more than about 1 minute, it is probably caused by an excessively hot mic signal. This usually means the mic is very sensitive. The internal mic gain path inside ToneDexter is fixed to accommodate most mics and mic placements. There is no mic gain adjustment. Occasionally, and most typically with upright bass, a sensitive mic placed close to an instrument will cause the input circuit to overload, resulting in excessively long training sessions that may not even complete. Don’t worry, ToneDexter won’t be harmed if this happens.

The are several remedies:

Another cause we have seen, particularly with upright bass, is when the training mic is physically attached to the bass. This scenario would arise when using an attached mic (designed for live performance) for the training session. Mechanical coupling through the mic mount, in response to strong pizzicato playing, has been known to cause interference with the training. It is best to avoid this situation, but if you must, then play more softly if pizzicato, or better still play arco.

For firmware versions V1.66 and below:
This is normal behavior if you are not training from slot 22. It is caused by the feedback mitigation algorithm which automatically looks for your instrument’s hot spots and dials them back a little. These hot spots are the low frequency resonances of your instrument body that are most prone to feedback. Even though the bass is perceived to be weaker, it often is sufficient when playing back at louder volumes. At lower volumes, use the bass EQ to boost the lows.

Training from slot 22 circumvents the feedback mitigation and is the slot used for training for studio quality mic sound, but may not be optimum for stage use.

For firmware versions V2.0 and later:

What's the difference between the DI and Main Instrument outputs?

Both outputs are the same audio feed, after the FX loop, and after the Boost switch.

Both are balanced which provides protection from induced hum. The DI XLR is always balanced and is 6dB hotter than the main 1/4″ output. The main 1/4″ out is a Tip/Ring/Sleeve jack that is impedance balanced and will function either balanced or unbalanced. For best results with long runs, use a 1/4″ TRS cable to connect to a balanced interface/mixer 1/4″ or XLR input. For short runs to a stage amp, you can use a normal 1/4″ mono instrument cable. This will unbalance the output and is perfectly fine for this situation. 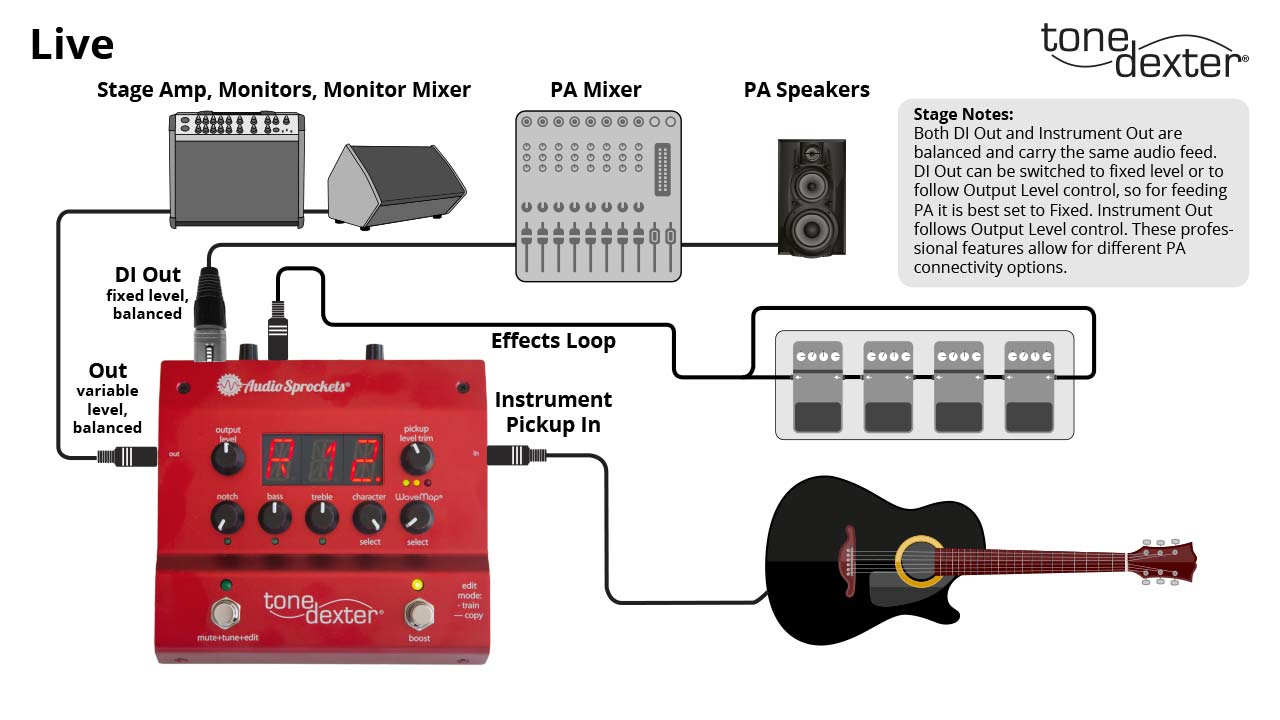 Why does my ToneDexter hum?

If you are using a passive piezo pickup, you may hear some AC power line hum if your system is not grounded. In normal use ToneDexter will be connected to an amplifier or PA system which is grounded, and you will not experience any noticeable hum. But if you do experience hum when training using just headphones, plugging one of the outputs into a grounded system, such as an audio interface or mixer, will eliminate the hum.

I don't understand what the Phase switch is for

From the User Guide…
The phase switch on the rear panel changes the phase (flips the polarity) of all the outputs. This is significant for two reasons:

Can I backup my WaveMaps?

Coming soon with firmware V1.40 with be the ability to move WaveMaps in and out of the unit. This is handy for backup, archiving, and using the same Wave-Maps on multiple units. In addition, the new system allows WaveMaps to be given meaningful alpha numeric names on your computer. They can be renumbered and reloaded with new ordering, allowing a method of resequencing that is more convenient than multiple copy and paste operations using the unit itself. Please note that the WaveMaps file format is proprietary and can only be used in a ToneDexter environment. Check out details in the User Guide.

What power supplies can I use?

The power supply provided with ToneDexter has a universal input which means it will run off USA mains power, as well as international mains power which varies from country to country. The Power supply specs are… Input: 100-240V 50-60Hz 0.4A, Output 12V DC 1.0A 12W Max. Four power socket adaptors are included for US, UK and other international standards.

ToneDexter works from a range of voltages: 9-15V. It tolerates either the effects pedal standard of negative center, or the more general standard of positive center. It requires about 5 to 6 watts, which is more than many adapters can provide. The reason the figure is not precise is because it depends on how stiff the supply is during the period when ToneDexter is starting up.

To figure the wattage, multiply voltage time amperage. For example, 9V at 200mA would be 9V x 0.2A or 1.8 watts. That’s not enough since ToneDexter requires 5 to 6 watts.

Many pedal board power supplies with multiple outputs with work, but some of them do not provide enough power in any single output port. If they have isolated outputs, it is possible to parallel two outputs together to double the available power using a daisy chain pedal power cable. 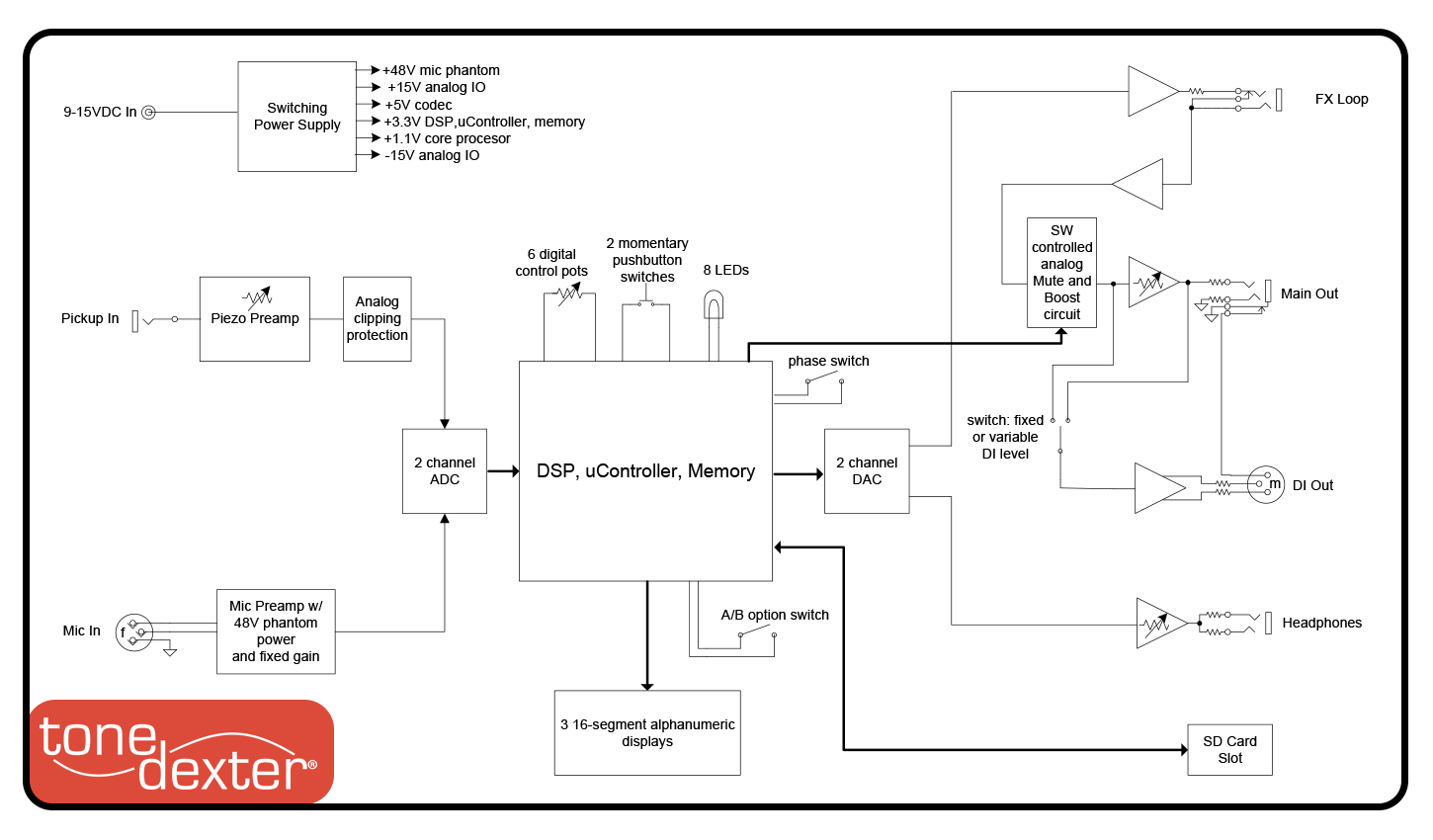